According to Kegan and Lahey, the main reason so many of us fail is because we focus on changing behaviour, when we should work on changing our mindset.  I like their analogy of wanting IT to do something different: sometimes we can make that happen by adding on new hardware or downloading an app; other times we won’t be able to use the new hardware or app unless we get a whole new operating system.

The following steps to achieve lasting change are based on Kegan and Lahey’s Immunity to Change framework. 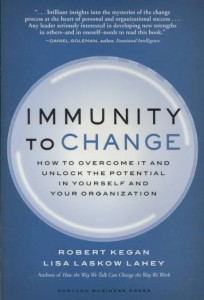 Claire is a triathlete.  Here’s her change goal:

I’m going to change how I swim so that in a triathlon my effort level is a 3 on a 5 point scale, so that I go into the bike stage feeling full of energy.

Step 2: List the things you do now that work against this change goal

Here, list as many things as you can think of.  You don’t need to explain them.

Step 3: Imagine trying to do the opposite of your behaviours in Step 2

What would be the worst thing about that for you – how does it feel?  Then, turn these fears around – to protect yourself from those feelings, what do you need to do?

At this point, you are probably feeling stuck, because your change goal and commitments are pushing you in opposite directions.  That’s good – you’re getting a better understanding of why it’s so hard to make this change.

Some of Claire’s assumptions:

If the assumptions you’ve identified are true for you, they make the commitments inevitable, and generate your current behaviours.  So it’s no wonder it’s hard to stop doing what you do now.

That’s where you take action to learn whether or not your assumptions are true.  If they aren’t all as true as you think, then you have no need to continue doing the things you do now that prevent you from achieving your goal.

Keep an eye on our updates for suggestions on how to test your assumptions.  In the meantime, what do you learn about yourself by working through the first four steps?